A fox had fallen into a well, and had been casting about for a long time how he should get out again, when at length a goat came to the place, and wanting to drink, asked Reynard whether the water was good, and of there was plenty of it .The fox, dissembling the real danger of his case, replied :"come down, my friend, the water is so good that I can not drink enough of it, and so aboundant that it can not be exhausted ."Upon this the goat without any more ado leaped in, when the fox, taking advantage of his friend's horns, as nimbly leaped out, and coolly remarked to the poor deluded goat :"if you had half as much brains as you have beard, you would have looked before you leaped."

A bear used to boast of his excessive love for man.saying that he never worried or mauled him when dead .The fox observed .with a smile :"I should have thought more of profession if you never eaat him alive ."

Better save a man from dying than slalve him when dead. 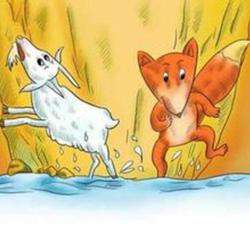 A Leopard and a fox had a contest which was the finer creature of the two ,the leopard put forward the beauty of its numberless spots ,but the fox replied: "It is better to have a versatile mind than a variegated body.

Three bulls fed in a field together in the greatest peace and amity .A lion had long watched them in the hope of making prize of them, but found that there was little chance for him so long as they kept all together .He therefore began secretly to spread evil and slanderous reports of one against the other ,till he had formented a jealousy and distrust amongst them . No sooner did the lion see that they avoided one another ,and fed each by himself apart ,than he fell upon them ,and so made an easy prey of them all.

The quarrels of friends are the opportunities of foes. 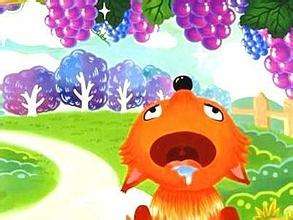 A Fox, just at the time of the vintage, stole into a vine-yard where the ripe sunny Grapes were trellised up on high in most tempting show. He made many a spring and a jump after the luscious prize, but, failing in all his attempts, he muttered as he retreated："Well what does it matter! The Grapes are sour!"

A jackdaw, as vain and conceited as jackdaw could be, picked up the feathers which some peacocks had shed, stuck them amongst his own, and despising his old companions, introduced himself with the greatest assurance into a flock of those beautiful birds .They, instantly detecting the intruder, stripped him of his borrowed plumes, and falling upon him with their beaks sent him about his business .The unlucky jackdaw, sorely punished and deeply sorrowing, betook himself to his former companions, and would have flocked with them again as if nothing had happened .But they, recollecting what airs he had given himself, drummed him out of their society, while one of those whom he had so lately despised, read him this lecture ："Had you been contented with what nature made you, you would have escaped the chastisement of you r betters and also the contempt of you r equals。”